Beginning January 1, 2013, a new 3.8 percent tax on some investment income will take effect. Since this new tax will affect some real estate transactions, it is important for REALTORS® to clearly understand the tax and how it could impact your clients. It’s a complicated tax, so you won’t be able to predict how it will affect every buyer or seller.

To get you up to speed about this new tax legislation, the NATIONAL ASSOCIATION OF REALTORS® has developed this informational brochure. On the following pages, you’ll read examples of different scenarios in which this new tax – passed by Congress in 2010 with the intent of generating an estimated $210 billion to help fund President Barack Obama’s health care and Medicare overhaul plans – could be relevant to your clients.

Understand that this tax WILL NOT be imposed on all real estate transactions, a common misconception. Rather, when the legislation becomes effective in 2013, it may impose a 3.8% tax on some (but not all) income from interest, dividends, rents (less expenses) and capital gains (less capital losses). The tax will fall only on individuals with an adjusted gross income (AGI) above $200,000 and couples filing a joint return with more than $250,000 AGI.

Individuals with adjusted gross income (AGI) above $200,000
Couples filing a joint return with more than $250,000 AGI

Formula: The new tax applies to the LESSER of

John and Mary sold their principal residence and realized a gain of $525,000. They have $325,000 Adjusted Gross Income (before adding taxable gain).

Barry and Michelle inherited stocks and bonds that they have decided to liquidate. The sale of these assets generates a capital gain of $120,000. Their AGI before the gain is $140,000.

Harry and Sally have substantial income from their securities investments. Their AGI before including that income is $190,000. Their investment income is listed below.

Hank has a “day job” from which he earns $85,000 a year. He owns several small apartment units and receives gross rents of $130,000. He also has expenses related to that income. 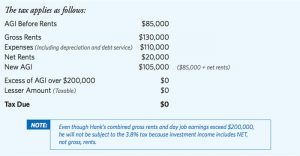 Henrietta’s sole livelihood is derived from owning and operating commercial buildings. Thus, these assets are treated as business property and not as investment property. Her income stream is outlined below.

Example 6: Sale of a Second Home with No Rental Use (or no more than 14 days rental) 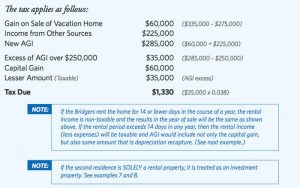 Example 7: Sale of an Inherited Investment Property (Residential or Commercial)

In 2010, Ethan inherited a four-plex investment property from his great aunt. She had used it for many years as an investment rental property in San Francisco. At the time of her death, the adjusted basis of the property was $10,000. During her period of ownership, she had taken $240,000 of depreciation deductions on it. Its fair market value was $900,000 when she died. Because there was no estate tax for 2010 and because carryover basis was in effect, Ethan’s basis in the inherited property is also $10,000. The prior depreciation allowances carry over to him, as well. He continues to use the property as an investment rental property.

Ethan later sells the property for $1.2 million. He is single and reports Schedule C self-employment income of $180,000. 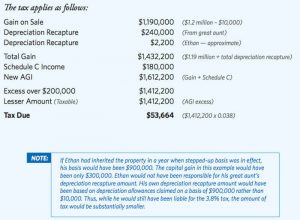 Example 8: Purchase and Sale of Investment Property (Residential or Commercial)

Ethan has purchased an investment property for $900,000. During his period of ownership, he takes $230,000 in depreciation deductions. He has also made some improvements to the property. At the time of sale, his adjusted basis in the property is $760,000. He subsequently sells the property for $1.2 million. In the year of sale, he is single and reports self-employment income of $315,000. 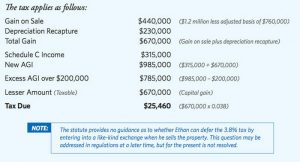 This new tax was never introduced, discussed or reviewed until just hours before the final debate on the massive health care legislation began. That legislation was enacted on March 23, 2010, more than a year after the health care debate began. This new tax was put forward after Congress was unable to agree on changes to current law that were sufficient to pay for the proposed changes to the Medicare program and increased subsidies to individuals and businesses.

The new tax raises more than $210 billion (over 10 years), representing more than half of the total new expenditures in the health care reform package. NAR expressed its strongest possible objections, but the legislation passed on a largely party line vote.

The new tax is sometimes called a “Medicare tax” because the proceeds from it are to be dedicated to the Medicare Trust Fund. That Fund will run dry in only a few more years, so this tax is a means of extending its life.

A second new tax, also dedicated to Medicare funding, is imposed on the so-called “earned” income of higher income individuals. This earned income tax has a much lower rate of 0.9% (0.009). Like the tax described in this brochure, this additional or alternative tax is based on adjusted gross income thresholds of $200,000 for an individual and $250,000 on a joint return. Like the 3.8% tax, this 0.9% tax is imposed only on the excess of earned income above the threshold amounts. An example and some analysis of this tax is presented in Example 5 of this brochure.

Another way of thinking about these new taxes is to think of the 3.8% tax as being imposed on a portion of the money that you make on your money – your capital (sometimes referred to as “unearned income”). The 0.9% tax is imposed on a portion of the money you make on your labor – your salary, wages, commission and similar income related to earning a livelihood.