The consolidated tax plan is out, and the final vote is likely to occur this week. We are relieved to learn that under the new plan, many of the housing-related components remain relatively favorable to the industry. In fact, the National Association Of Homebuilders came out this weekend in support of the current bill. In anticipation of the vote, our Manager of Housing Economics, Ali Wolf, dug through the bill and pulled out some snippets to help provide clarity on what it means for the housing market and wider economy. You’ll notice in the sections below, what may be good, bad, or neutral for one region or individual could have a different outcome for a different cohort.

Before we continue, please note that we are not tax professionals, nor is this a comprehensive list of all the changes and implications; the full bill is 500+ pages! In addition, we aim to make our analysis nonpartisan.

Decreased individual tax rates. The new bill keeps 7 tax brackets, but lowers the effective rate in five of the seven tiers. The table below breaks out the changes. These lower rates will help Americans keep more of their paychecks each month. These aren’t permanent, however. The new brackets are set to expire in 2025.

The average American will get more money back. As expected, the proposed plan doubles the standard deduction, making it $12,000 for a single filer and $24,000 for a married couple. Under the current plan, it is estimated that 70% of Americans already use the standard deduction. With the new bill, that number could jump to 90%, putting more money back in the hands of the average American. In particular, regions such as the Midwest and Southeast are set to experience the biggest benefit.

2/5 rule intact. Both the House and Senate bills planned on reforming the capital gains tax on housing, but in the reconciled version, the current law remains in place. This means sellers can still exclude their capital gains from taxes if they’ve lived in the home for two of the previous five years.

Mortgage interest deduction (MID) capped at $750K. We struggled at first with whether we should place this update in the “bad” section, but decided to look at this through a glass-half-full lens. The cap under the House bill was proposed at $500K, but the Senate wanted to keep it at $1 million. Ultimately, they settled on $750K, which also applies to second homes. Current homeowners will be grandfathered into the existing $1 million cap.

The new MID cap overwhelmingly affects high-cost markets. We wanted to understand the impacts on one such market, California. The table below looks at which actively selling builders in California had the highest percentage of their last twelve months (LTM) closings under $940K. $940K was estimated based on a 20% down payment, leading to a mortgage of $750K. For many top builders in the state, new homes are delivered below this cap (see table below). On the other side of the spectrum, builders like Irvine Pacific and Toll Brothers have roughly 40% and 85% of their LTM closings under the $940K mark, respectively. Breaking this out by city shows that Irvine, San Diego, and Los Angeles had only 40-50% of their projects priced below this cap.

To play devil’s advocate, in the long run, the new tax plan could move capital away from housing. For some representatives, that was the intention because they believed the current tax code was far too favorable to housing compared to other investment opportunities. Beyond that, changing the cap could negatively impact supply if current homeowners decide it’s not worth growing into a move-up home because the MID wouldn’t apply. 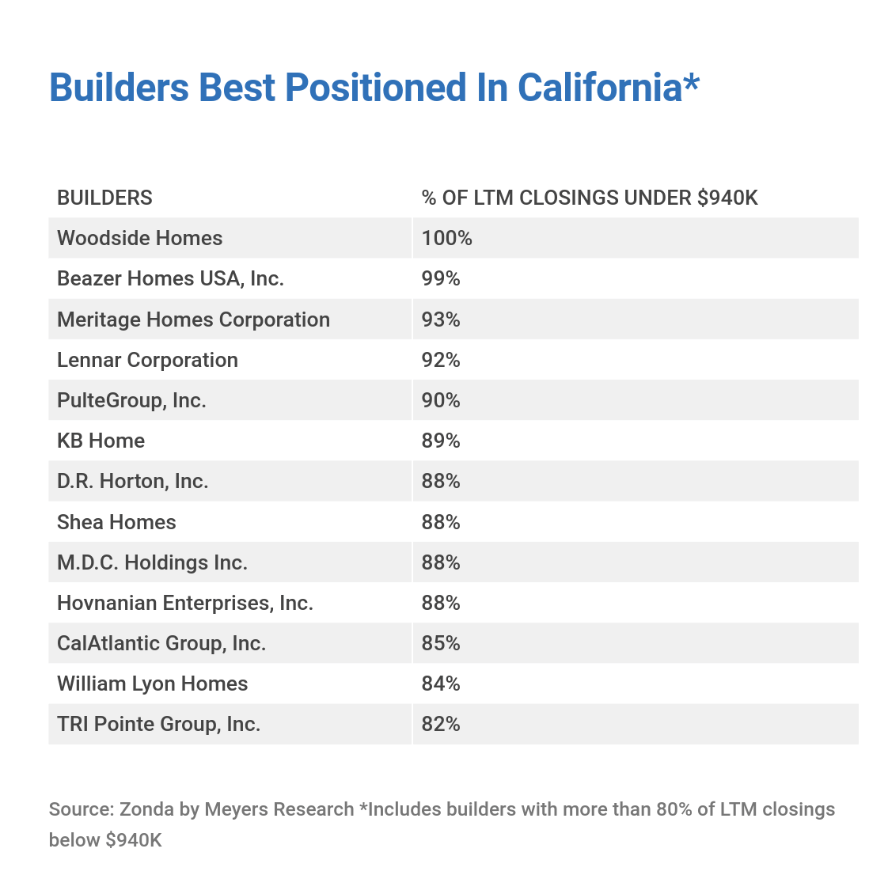 Ultra high wealth individuals will get a cut. Objectively, there is an argument to be made that this bill overwhelmingly benefits wealthier Americans compared to lower and middle class individuals. This could further widen the income disparity in our country.

State and local income taxes (SALT) are capped at $10K. Under the new proposal, filers must choose between deducting sales, income, and property taxes up to $10,000, instead of writing off all three. This goes back to the argument of regional difference. Individuals need to choose to itemize their taxes in order to care about SALT. As mentioned above, the lion’s share of Americans will take the standard deduction under the new tax plan, making SALT irrelevant. However, in high-tax states like California, New York, New Jersey, Connecticut, and Maryland, the cap could be a negative for upper-middle class individuals. In particular, professionals in big cities may end up paying more in taxes under this new plan, with the change hitting married couples harder than singles. The Tax Policy Center notes that in 10 states, plus The District of Columbia, roughly a third of the residents deduct state and local taxes. Will the high costs become too burdensome on some individuals, encouraging them to move? In some cases, yes. But there are many other reasons to live in some of these high-cost markets, such as lifestyle, culture, location, and weather.

Budget hawks, get ready. According to the nonpartisan Joint Committee on Taxation, this new tax bill is estimated to add $1.5 trillion to the deficit. While it can be argued that some of the deficit will be made up through revenue-raising measures and increased investment, experts believe the numbers don’t even come close to a realistic solution to the increased deficit.

Harder when a downturn hits. Without sounding alarmist, when an economic downturn hits, we want to have tools avaliable to help stimulate growth. In today’s environment, we know that monetary policy will be little help since the Federal Funds Rate is still hovering near historic lows. Besides that, issuing a new tax bill today is questionable timing given we are on the third longest expansion in history. Historically, the government uses tax cuts in dark times to encourage consumers to spend money.

We’d be remiss to not also mention the impact on corporate tax rates. The bill drops the corporate tax rate from 35% to 21%, not only helping the US remain competitive on a global stage, but also helping economic growth domestically. The lower tax rate is applauded by many business owners who cite the ability to spur investment. In addition, companies that harbor money overseas may be more likely to bring the cash back to the US.

We’ve looked at historical examples of tax reform to understand the impacts empirically. In some cases, we saw that the tax cuts stimulated economic growth and the labor market (correlation and causation can be debated), but in other cases, that didn’t seem to hold true. While it’s too soon to tell the overall implications of the bill, we do know that some parts of the country will benefit more than others, and there are still some positive components for the housing market. Beyond that, the passage of the tax plan was baked into the stock market, and since the bill will likely be voted in, this could keep the bull market rallying.