La Jolla is the most famous neighborhood in San Diego. It is home to the University of California, San Diego, La Jolla is part university town, part artsy and part historic. Rising abruptly from the coast, La Jolla has many large expensive view homes. That’s not the whole town, though. Along with some apartments, there are many modest homes that are well maintained, and have very good views of the ocean.

According to tradition, the name La Jolla (pronounced la-HOY-a) derives from a Spanish word of identical pronunciation, la joya, meaning “the jewel.” According to research, the name La Jolla is a Spanish geographical term meaning “hollow, cavity, pit, or river bed,” and was first applied here to refer to a Spanish rancheria in the hollow where La Jolla Bay cuts into the coastline. In one sense the claims of tradition are more accurate than those of research, for the town is indeed a jewel.

La Jolla occupies seven miles of curving coastline jutting out into the Pacific Ocean. Although officially a part of San Diego, it retains its own small-town atmosphere, its own civic pride, and its own La Jolla postmark. It is an elegant, exclusive shopping community, filled with boutiques, import shops, gourmet restaurants and stores that carry only the best. And it is a luxurious residential community, where beautiful homes, surrounded by lush subtropical plants, cover the hillsides overlooking the Pacific.

La Jolla hilly seaside resort community, occupying 7 miles (11 km) of curving coastline along the Pacific Ocean in Southern California within the northern city limits of San Diego. La Jolla had the highest home prices in the nation in 2008 and 2009, the average price for such a home in La Jolla was reported as US$ 1.842 million in 2008 and US$ 2.125 million in 2009. The 2004 estimated population was 42,808. La Jolla is surrounded on three sides by ocean bluffs and beaches and is located 12 miles (19 km) north of Downtown San Diego, and 40 miles (64 km) south of Orange County California The climate is mild, with an average daily temperature of 70.5 °F (21.4 °C) La Jolla is home to a variety of businesses in the areas of lodging, dining, shopping, software, finance, real estate, bio-engineering, medical practice and scientific research.

The University of California, San Diego (UCSD) is located in La Jolla, as are the Salk Institute, Scripps Institution of Oceanography, and the headquarters of National University (though its academic campuses are elsewhere). 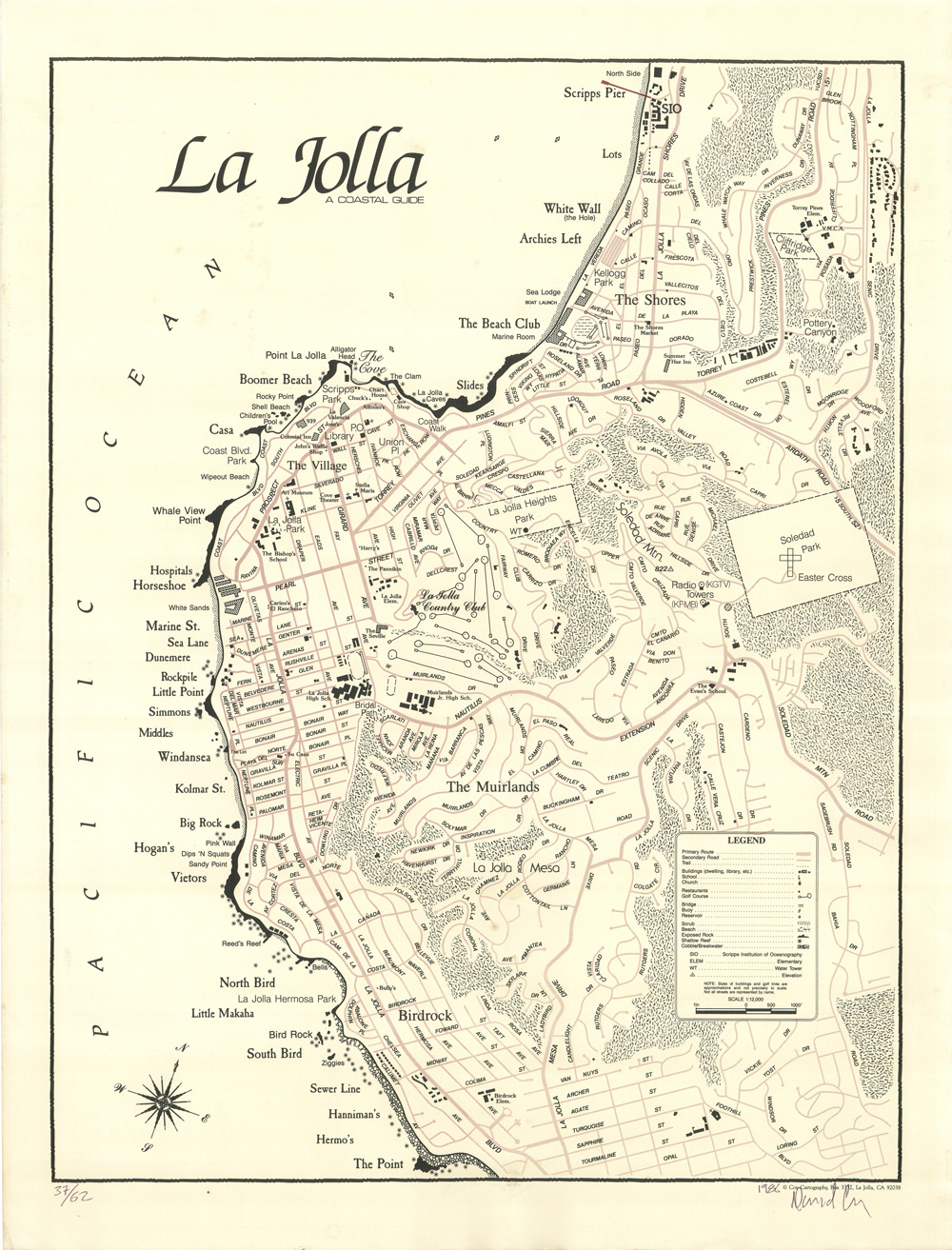 Local Native Americans, the Kumeyaay, called this location mat kulaaxuuy, “land of holes” What sort of topographic feature the description “holes” refers to is uncertain, but it may be the sea-level caves on the north-facing bluffs which are visible from La Jolla Shores. This was apparently corrupted by the Spanish occupiers to “La Jolla”. An alternate suggested origin is that the name is a corruption of the Spanish La Joya, meaning “the jewel”. Although disputed by scholars, this origin of the name is widely cited in popular culture, and has given rise to the nickname “Jewel City”.

The La Jolla Community Planning Association advises the City Council, Planning Commission, City Planning Department as well as other Governmental agency as appropriate in the initial preparation, adoption of, implementation of, or amendment to the General or Community Plan as it pertains to the La Jolla area as well as review specific development proposals. The nonprofit La Jolla Town Council represents the interests of La Jolla businesses and residents that belong to the Council. The Bird Rock Community Council serves the Bird Rock neighborhood, while the La Jolla Shores Association serves the La Jolla Shores neighborhood.

Community organizations include Independent La Jolla, a membership-based citizens group seeking to secede from the city of San Diego. Service clubs in La Jolla include Kiwanis, Rotary, La Jolla Woman’s Club and the Social Service League of La Jolla to name a few.

The University of California, San Diego is the center of higher education in La Jolla. The campus’s original name was UC La Jolla before it was changed to UC San Diego. UCSD includes the Scripps Institution of Oceanography and the San Diego Supercomputer Center.

National University is also headquartered in La Jolla, with several academic campuses located throughout the county and the state. Among the several research institutes near UCSD and in the nearby Torrey Pines Science Park are The Scripps Research Institute, the Burnham Institute (formerly called the La Jolla Cancer Research Foundation) and the Salk Institute.

La Jolla is served by the San Diego Unified School District. Public schools include La Jolla High School, La Jolla Elementary, which was the first public school, built in 1896 with the first classes in the Heald Store at the corner of Herschel Avenue and Wall Street but then moved to its present location on Girard Avenue, Torrey Pines Elementary, and Bird Rock Elementary, as well as The Preuss School UCSD, a public charter school. The community’s prep schools are The Bishop’s School, which was the first private school opened in 1909, The Children’s School, Integral Elementary School of La Jolla, Delphi Academy, Stella Maris Academy, All Hallows Academy, The Gillispie School, and the Evans School. La Jolla Country Day School is located in the nearby community of University City.

Educational Facilities in and around La Jolla